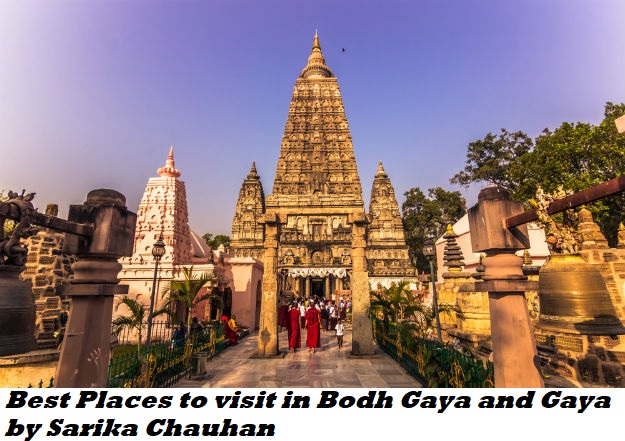 Delhi girl for sure with Bihari influence. I grew up in India’s capital New Delhi, but my roots are in Bihar. And I’m aware of our culture like anyone else who lives in Bihar, maybe not more than them, but surely not less. And if we talk about Bihar’s history, it is vast, be it Nalanda, Ashoka or Lord Buddha.

My parents are inclined towards spirituality, they are fond of travelling as well and with them I got the opportunity to know about our culture, people, and history. And what could be better than exploring Bihar with them. In this blog I’m going to share our experiences of Gaya and Bodh Gaya. They are much more famous amongst foreigners than Indians. Bodh Gaya is a pilgrimage for Buddhists and Gaya attracts thousands of Hindu pilgrims, who come here for pind daan. Plan your Varanasi Gaya tour package with Travel Agents in Delhi.
Bodh Gaya is the place where Gautam Buddha attained enlightenment under a banyan tree, which is now known as the Bodhi Tree. Gaya is mentioned in great epics such as The Mahabharata, and The Ramayana. It is believed that Lord Rama along with Sita and brother Lakshman visited Gaya for pind daan of their father Dasharath during the month of Pitru Paksha (also called Shradh). Sarnath in Varanasi is the place where Lord Buddha gave his first lesson to his followers or disciples. Visit Sarnath on your Varanasi tour package from Tour operators in Delhi.
Gaya and Bodh Gaya are often called twin spiritual cities of India, both are famous for their rich religious culture. One is for Hinduism and another for Buddhism.
So, here are the places, which we visited and in my opinion it’s worth visiting if you want to get an insight of sacred Indian destinations.

Vishnupad Mandir (Temple)
Vishnupad mandir is the main attraction of Gaya, the temple is situated on the banks of Falgu river and it features a 40-cm-long footprint of Lord Vishnu, which draws devotees from across the country. Natives of Gaya say that Lord Vishnu killed a demon named Gayasur here by stamping his foot on his chest. And after Vishnu pushed Gayasur under the earth, his footprint was retained in a rock. This famous temple was constructed by Rani Ahilyabai Holkar of Indore, but it has been renovated several times.

Yama Temple – Pretshila Hill
Pretshila Hill, which literally means hill of ghosts, please do not reckon it by its name, kidding ;)… It is situated on top of the hill in north-west of Gaya and holds a special place for Hindus where they do pind daan. This temple is dedicated to Lord Yama, who according to Hindu mythology is the God of Death. Close to this temple there is a tank called Ramkund, it is believed that Lord Ram bathed once and hence it got its name. Devotees believe that just by taking a bath in this tank is going to wash away all their sins.

Mangla Gauri Temple
Mangla Gauri Temple is among one of the 18 Maha Shakti-peeth’s in India. It holds high importance for the Hindus, and has been mentioned in the 3 Puranas, Vayu, Padma, and Agni. The shrine is dedicated to Sati, the wife of Shiva. The goddess is worshipped in the breast-form, symbolizing the love of a mother. Devotees come here to pray so that all their wishes are fulfilled by the goddess. People have to climb some stairs to reach the temple.

NOTE:-Best Things to do in Varanasi

Falgu River
Whenever you plan to visit Gaya, make sure to give this unique river some place in your itinerary. It is such an interesting place where river flows under the sand and not vice versa. There is an interesting story is related with that phenomenon. It is believed that during their exile, Rama and Sita decided to rest for a while on the sandy banks. When it was time for pind-daan, Lord Rama went make some arrangements of food to offer his ancestors, while Sita waited on the banks. During that period Rama’s ancestors appeared in front of her and requested that the ceremony be conducted without delay. Rather than waiting for him, she performed the ceremony by offering sand, thereby granting them salvation.

Later she thought that Rama would not believe her, she asked the sacrificial fire, a cow, the Falgu, a brahman and a tree to stand witness for her act. Sadly, when Rama arrived and questioned the witnesses, they all turned false. They were hoping a second round of offerings, therefore all the witnesses other than the tree said that Sita was lying. She was enraged and cursed all the witnesses but the faithful tree. Thus, the Falgu was condemned to run below the ground hiding his head in shame, for all time.

Dungeshwari Cave Temples
It is believed that Lord Gautama Buddha meditated in the three caves here before continuing his journey to Bodhgaya. It is situated around 12 km northeast of Gaya, also known as Mahakala Caves. This is the place where Gautama realized that one cannot attain enlightenment by self-indulgence or self-abasement. And from here he reached Bodhgaya where he finally attained enlightenment.

The Mahabodhi Temple
One of the most important religious sites for Buddhists in Bodh Gaya is the Mahabodhi Temple, the very place where Lord Buddha attained enlightenment. In 2002, it has been declared a UNESCO World Heritage Site. The greatest attraction of the Mahabodhi Temple is the famous Bodhi tree, beneath whose shade Lord Buddha used to meditate. Even now, monks and devotees pray before the Bodhi tree. It is believed that this temple was initially built by Emperor Ashoka after he started following Buddhism. There are few contradictions about that, but we shall not get into it. Overall, this place offers peace to your mind and you can hear continuous canting. Visit mahabodhi temple in Bodh Gaya on your trips from a Travel Agency in Delhi.

The Great Buddha Statue, Bodh Gaya
There is this massive statue of the great Gautama Buddha in Bodh Gaya, which is 25 meters high, resembling Lord Buddha in his meditation pose known as the mudra on top of a blooming lotus, carved from red granite and sandstone. This statue is believed to be the tallest one and the first Buddha installed in the country.It took 7 years to complete this humongous statue.

Chinese Temple
The Chinese Temple in Gaya stands nearby the Mahabodhi Temple and is a spectacular Buddhist temple built by Chinese-Buddhist monks. The architecture, therefore, is an amalgamation of the beautiful Indian and Chinese designs, especially the temple exterior, which resembles a Chinese monastery. The Buddha statue inside the Chinese Temple is more than 200 years old and is believed to have been made and imported from China. The temple has three marvelous golden statues of Lord Buddha.

Sujata Stupa
Sujata Kuti stupa is situated across the Falgu River from Bodhgaya, and it was built to commemorate the residence of Sujata. The lady who fed the starving Buddha, which ended his seven years of asceticism. The ancient brick stupa was originally covered with lime plaster and painted white. It’s a 20-minute walk from Bodhgaya. A further 10-minute walk away is Sujata Mandir, the actual site of the banyan tree where Sujata is believed to have fed the Buddha.
I’m going to list a few things now, which will come handy during your trip to these two beautiful places.
First and foremost, book your tour through a reliable travel company/agent, like we have booked it through Ghum India Ghum. Reason for going with a reliable company is that they will provide you the authentic information through knowledgeable guides, which is the most important thing when you visit such beautiful and culturally enriched places.

Gaya is a tourist hotspot and people from across the world visit it, so the hotels cater to tourists from all budget options. From luxury resorts to quaint homestays and pocket-friendly hotels, Gaya has them all. For those in search of homestays, Ansari House, Sakura House, Vistara Home Stay and Nandeshwari have fetched good reviews from the visitors. While, Sambodhi Retreat, Hotel Gharana and Hotel Grand Palace are perfect for luxurious stay. Hotel Swagat, Hotel Maurya Vihar Bodhgaya, C K International Bodhgaya and Hotel R. K. Palace Bodhgaya are the perfect options for those travelling on a limited budget. Get the best deals on Hotel in BodhGaya from tour and travel companies in Delhi.