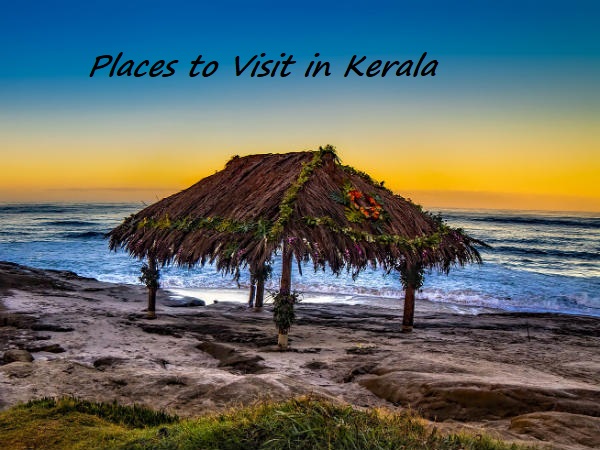 Where to start for writing on Places to visit in Kerala, Entire Kerala state is beautiful, it’s very difficult to choose top of them, We our expertise i can definitely say that it perfectly justify   Kerala tourism Tagline of God’s Own Country. Kerala tourism is blessed with lush green mountains situated on western ghats to stunning Arabian sea shores. It has famous hill stations like Waynard and Munnar to Periyar Wildlife sanctuaries to never ending backwaters. Kerala is blessed with a huge stretch of Tea Gardens to several breathtaking waterfalls. Being a tourist hub in India and main centre for Ayurveda in India Kerala have several Ayurveda wellness resorts. Ghum India Ghum Being a leading travel agent in Delhi and a leading tour operator in India, We are here with a list of top five places to visit in Kerala, we prepared this list truly based on your client feedback. Kerala god’s own town offers a full year tour to its visitors. But still, the best time to visit Kerala state is during the winter season between October to March during that time the temperature ranges from 24 to 28 degrees Celsius. But during the summers period from March to May this time you can explore the stunning hill stations of Kerala, and during monsoon season you can relax and enjoy the Ayurvedic treatments in Kerala.

Munnar- one of the most Romantic places in India
Munnar is the most beautiful and amazing hill station of Kerala situated at an altitude  of 1600meters located at the junction of Kundala, Muthirapuzha and Nallathanni Rivers. Munnar is regarded as one of the best destinations in Kerala specially for Kerala Honeymoon tour package, surrounded by lush green tea plantations  and spice plantations. Book your kerala tour from Delhi and visit Munnar which is Blessed with beautiful lakes, Agasthyakoodam peak which is the 2nd highest peak in Kerala

NOTE: Things to do in Tamil Nadu

Alleppey- India’s Own version of Venice
Alleppey is regarded as India’s Own Venice and this beautiful city of Kerala is famous for its stunning backwaters which is a combination of Canals and Lagoons, Alleppey  best experienced by a houseboat cruise and you may also go for Alleppey Houseboat stay. Apart from backwater Alleppey offers sightseeing of Alappuzha Lighthouse, Mullakkal Temple, Punnamada Lake which is world famous for Snake boat races of Kerala which is an Annual event. Explore best of Alleppey on your Kerala tour packages from Chennai.

Varkala – Quaint Hamlet by the Sea
When you talk about Best beaches in India than Varkala is one of the beaches which come first in your mind. There is lot of beautiful beaches in Kerala like Alleppey beach, Kovalam beach, Marari beach and many more but Beauty of Varkala is simply amazing which keep it above all beaches in Kerala. Explore unexplored places around Varkala with tour operators in Delhi. Varkala beach is Situated on the shores of the Arabian Sea is cliff beach and is just 19kms from the capital city of Trivandrum. Varkala offers some other tours of some other beautiful beaches in Kerala such as Kappil Beach, Odayam Beach and Aliyirakkam Cliff Beach. Soft sands of Varkala are lined by lush palm groves and playful waves.

Kochi – Gateway to Kerala
Kochi regarded as the Queen of the Arabian Sea, Kochi previously known as the Cochin is a Beautiful port city in Kerala. Kochi has had a port since 1341, Kochi is the major sea route of India from the last several centuries. Kochi city has the architecture of Colonial and modern time. This multi cultural city is one of the most visited cities of Kerala and Koch acts as a gateway to several famous day trips from Kochi. Best Places to visit in Kochi are Ernakulam Shiva Temple, Dutch Palace, Indo Portuguese Museum, Cochin Jewish Synagogue, Fort Kochi Beach, Chinese Fishing Nets and many more. Book Kochi sightseeing places tour with a Travel agency in Delhi.